Consumer Units Explained – EVERYTHING You Need to Know

Often referred to using the slightly outdated term of ‘fuse-box’, a consumer unit is essentially the main control centre for a home’s electrical supply. It’s something nearly everyone can recognize but which fewer people can name and far fewer actually work. A bit of a shame since consumer units are both important and relatively easy to understand. 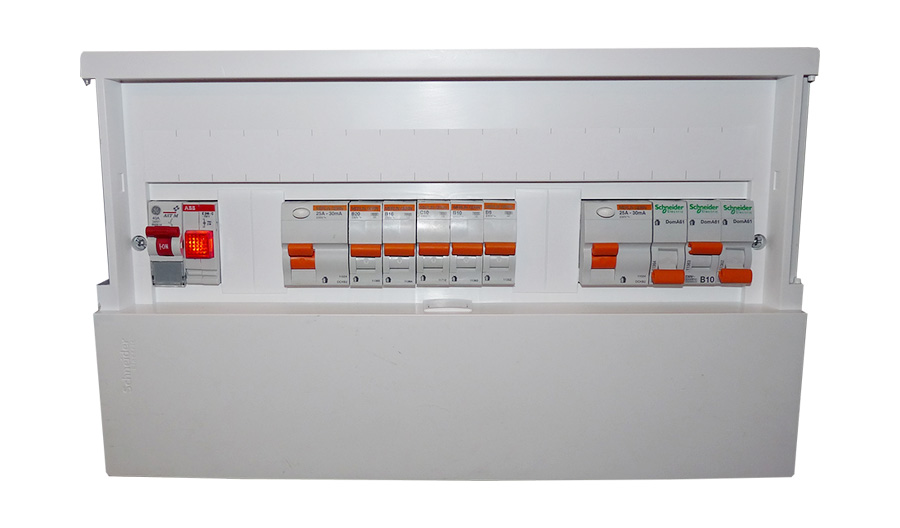 To break it down simply, the consumer unit is found at the point where the electrical supply enters your property from the electricity meter. It distributes that power throughout the property, and its key components – main switches, residual current devices (RCDs), and circuit breakers – can be, according to the component, either manually or automatically shut off to protect you and your property from injury or damage. When something causes a RCD or circuit breaker to turn off automatically, that component will have been said to have ‘tripped’.

So, you can consider your consumer unit a kind of check-point for the electricity entering your home and the main item in your property that protects against everything from electric shocks to electric fires. If you want to find your consumer unit, try looking in your utility room, downstairs toilet, or garage – they’re usually hidden away since they aren’t particularly attractive. If you want to be fluent in consumer unit workings, just read on so we can cover:

What is a Consumer Unit?

How to Use a Consumer Unit

By the time you’re finished reading, you should have developed a healthy respect for the protection supplied by a consumer unit and a strong understanding of their basic operation and layout.

What is a Consumer Unit

The role of a consumer unit is easy enough to grasp – as stated above, it controls the electrical supply throughout a single residential property. To understand how it performs that role, you really need to explore the individual roles of its three major components: the main switch, residual current devices, and circuit breakers.

The main switch is just what it sounds like – the central switch controlling the supply of mains electricity from the meter to the consumer unit and subsequently through to the rest of your home. While RCDs and circuits are usually tripped automatically, a mains switch is going to be switched on and off manually. If you want to conduct a piece of electrical repair or are going through an emergency situation, you’ll be turning off the consumer unit’s main switch.

When you turn the mains switch off, both the incoming live and the incoming neutral power will be separated from the rest of the unit – essentially, you’ll have isolated your consumer unit, and therefore the property itself, from the mains electricity supply. 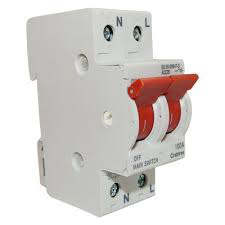 RCDs are switches that constantly monitor the electrical currents in your home. As a general rule of thumb, you’ll find your circuits split into two sets, with one RCD controlling each one; when one of those RCDs is tripped, all the circuits that it controls will be turned off. In the ever-popular Wylex consumer unit, the first RCD is next to the main switches and the second is about halfway between all the circuits. Most other consumer unit manufacturers follow that layout, although it isn’t written in stone.

When an RCD does switch itself off, it’s usually to prevent any electric shock or personal injury. As such, most RCDs are quite sensitive, rated at 30 milliamps – above that level, the electric current becomes dangerous to humans.

Let’s say you touch a live wire. The electricity will flow through an unintended path – namely your body. That change will be detected by the RCD, which will then trip and turn off the circuit, dramatically reducing the risk of serious injury or death. An RCD also provides protection against electrical fires caused by earth faults. If earth leakage is detected, the RCD will trip before the level of leakage becomes dangerous. 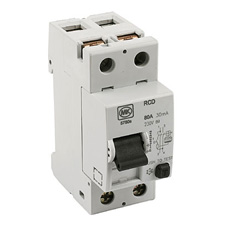 Circuit breakers can be thought of as similar to RCDs since they are safety switches that turn themselves off automatically to protect electrical circuits from damage. However, they are more specialised in that they control specific sections of your home. For example, you may have an individual circuit breaker covering ‘spare bathroom’, ‘downstairs toilet’, and ‘garage’, so your consumer unit will contain quite a number of individual circuits.

In the vast majority of consumer units, each will have its own miniature circuit breaker (MCB), and these will be tripped in case of:

If your consumer unit doesn’t use those components, it is almost certainly an older model that is no longer up to code. One sure-fire way to know whether you need to upgrade is to check whether you have rewireable fuses – if so, you need a new unit.

Most people will find themselves as acquainted as they need to be with a consumer unit by simply understanding those three main components, but there are a few further parts that could warrant your attention, including: 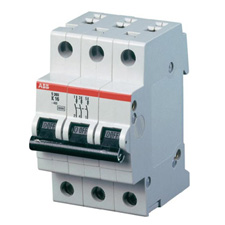 How to Use a Consumer Unit

You should now have a good working understanding of what consumer units do, how they work, and what components they use in the process. Now you understand that, you need to learn how to use your consumer unit.

It’s not a part of your home that will need frequent adjustment, but you should test your consumer unit regularly and understand how to use some of its features. Here’s a quick overview to cover the basics needed by the average homeowner.

Not all consumer units have inbuilt timers, but they’re becoming increasingly popular additions. If you don’t have a consumer unit with a timer inbuilt, keep in mind that you can simply have one fitted along the DIN rail instead of replacing the entire unit – it’s possible to do this yourself, though the exact instructions will vary by unit, and it’s generally recommended that you let a professional take care of the task.

Timers allow you to turn off certain circuits at set intervals. If you’re going on holiday and want to have your lights turned on and off at set times, a consumer unit timer is a convenient option. Simply set the time and leave your unit to do the rest. When you pick up a timer, make sure you check whether it’s a 7-day model or a 24-hour model. 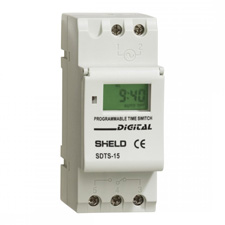 The main switch works manually, turning off the electricity supply to your home in one fell swoop. All you need to do is open the consumer unit, find the main switch, and then turn it off or on – it will not perform either action automatically. One thing to remember is that your home may possibly have one mains switch in a separate consumer unit. This is only likely if you have a larger external unit that consumes a lot of energy, but it’s worth keeping in mind. It’s just one reason why you should always test that the power has been shut off after you’ve deactivated the main switch.

Most of the time, everything will be back to normal after you switch the RCD back on. If it switches straight off again, you should turn off all the MCBs and then reset the RCD. If this doesn’t work, turn on each MCB one by one until you find the problem. If the RCD still won’t turn on, go around your home turning off all the sockets and lights, then try turning the MCBs on independently once again to isolate the appliance or switch responsible for the problem. If the RCD still turns off automatically, you need to contact a professional.

You’ll also need to test the RCD every month to make sure it’s working perfectly. Next to the switch will be a simple push button. Pushing it will create an earth leak that should trip the RCD; if it doesn’t, you need to contact a professional. Remember to test each RCD independently.

Like RCDs, a MCB will usually be tripped off automatically. You may overload a light fixture in your bedroom and find that only the electricity in that one room has been turned off – such cases are caused by a single MCB being tripped. You can simply reset the switch to get things back to normal. If that switch turns right back off, contact a professional. 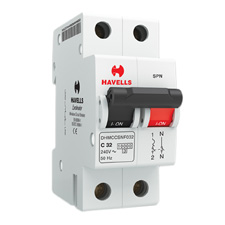 The essential function and components of consumer units are the same across all makes, and yet there are different types, including:

You may also find yourself choosing between several consumer units made by different manufacturers. There are a few options out there, but you’re almost certainly going to come down to selecting a Wylex or a Hager.

Wylex certainly boasts a superior lineage; they introduced the first ever consumer unit in 1897. Things have obviously changed a little since then, and Wylex has been at the forefront of that change. A policy of continuous design improvement means that they now produce a vast and diverse range of residential, commercial, and industrial consumer units, and they’re still the industry’s leading name. 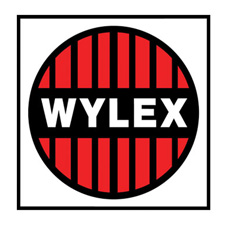 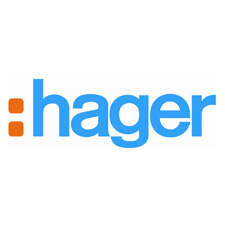 Nine times out of ten, you should simply cede to the advice of a qualified electrician. They’ll know the ins and outs of various makes and models, possessing the experience needed to recommend the best consumer unit to meet your needs.

All the cables and connections in your consumer unit need to be checked and tested by a qualified electrician, and you should not remove or replace your unit if you are not qualified to proper regulatory standards. That said, the basics of installation can be handy to learn if you need to identify any problems, and it always helps qualified professionals to have something to turn to.

Again, it must be stressed that these instructions should only be followed by a certified electrician. Trying to install or rewire your own consumer unit without proper certification is not a step you can take; beyond the legal ramifications, you will put yourself at risk of shock and possibly put your property in danger by accidently removing proper safeguards.

Consumer units are a small part of a residential property, and one that is seldom noticed until the electricity mysteriously turns off. Armed with the information provided above, you’ll now be able to diagnose the problem and probably sort it out by yourself without needing to call on the services of a professional. Of course, you’ll also understand when a certified electrician needs to be contacted and why performing certain consumer unit jobs yourself is more than a little unwise.

All in all, consider yourself more caught up concerning the consumer unit than nine out of ten people out there.

Get all our latest electrical offers,